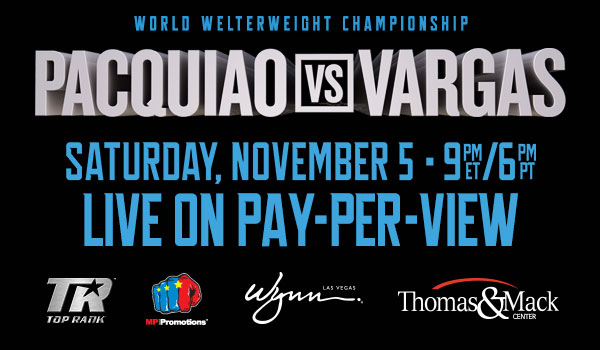 Is Jesse Vargas a legitimate champion?

Can Manny Pacquiao win another title?

The 27-year-old Vargas (27-1, 10 KOs) defends his WBO welterweight championship against the ageless Pacquiao (58-6-2) on Saturday night in Las Vegas at the Thomas & Mack Center.

Vargas comes into the fight having TKOed previously unbeaten Sadam Ali in March to claim the WBO’s vacant welterweight title. Pacquiao, 37, most recently came out of retirement and defeated Tim Bradley in April.

Despite being 10 years older than Vargas, Pacquiao heads into the weekend the favorite, with some books having the Filipino lawmaker at -750. (To win $100, you’d have to put $750 down.)