By Cheryl McCollum on February 17, 2021 in Entertainment, News 0 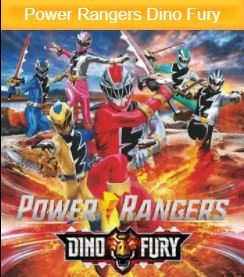 Power Rangers Dino Fury will premiere on Nickelodeon on Feb. 20 at 8 a.m. This kicks off the 28th season of the American children’s television program Power Rangers.

Plot
When an army of powerful alien beings are unleashed on Earth, threatening life as we know it, a brand-new team of Power Rangers, fueled by the pre-historic power of the dinosaurs, are recruited to deal with the threat.

Dino Fury is the first in the television series to be produced by Entertainment One, acquired by Hasbro in 2019. The season will be produced using footage, costumes, and props from the forty-third entry in the Japanese Super Sentai series Kishiryu Sentai Ryusoulger, making Dino Fury the fourth entry in the American series to utilize the motif of dinosaurs (having been preceded by Mighty Morphin Power Rangers, Power Rangers Dino Thunder and Power Rangers Dino Charge).