In today’s world, it can be difficult to spot what’s real news and what’s fake news. A sensational and oh-so-real-seeming false story can go viral in seconds.

In fact, it’s such a big problem, Facebook recently took out ads in U.K. papers just to teach people how to spot fake news.

Don’t think you ever fall for it? Well, as it happens, our brains loves the stuff so it’s REALLY hard to resist.

Using Facebook’s tips as a starting point, we also added other advice we found (all from reliable sources, of course) about being a critical consumer of news content. The result is 12 easy tips you can keep in the back of your mind so you’re less likely to fall for made-up stories. 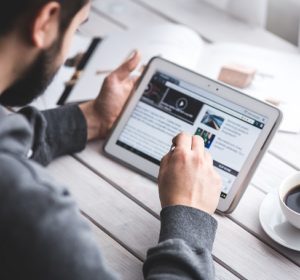 NOTE: Don’t forget to also run through this list with your kids. Teaching them to be careful media consumers is always a good idea!

1. Look closely at the URL. A phony or look-alike URL may be a warning sign of false news. Many fake news sites mimic authentic news sources by making small changes to the URL. NPR says to watch for endings such as “.com.co” that look real but may not be. For example, abcnews.com is the legit, but abcnews.com.co is NOT.

2. Watch for unusual formatting. Facebook says, many false news sites have misspellings or awkward layouts. Read carefully (and skeptically) if you see these signs.

3. Be skeptical of headlines. Fake news stories often have catchy headlines in all caps with exclamation points. If shocking claims in the headline sound unbelievable, they probably are. Another litmus test? If the headline invokes a strong emotional response, it should raise some red flags.

4. Read more than the headline. If the headline got your attention, FactCheck.org says you should read on before deciding whether to share the article. And, as you read, keep in mind some of the other signs it could be made-up news (keep reading for those!).

5. Investigate the source. Make sure the story is written by a source that you trust with a reputation for accuracy. If the story comes from an unfamiliar organization, check their “About” section to learn more. If the author is a person, maybe do a quick Google search to make sure they actually DID will all those Peabody awards and Pulitzer Prizes their description says they did (especially if such a decorated writer is reporting for non-mainstream website). If there’s no byline at all, that should also tell you something.

6. Check your own biases. Confirmation bias is the tendency for us to believe information (whether it’s true or not!) that confirms what we already think is true. None of us are immune, so that’s why it’s important to stop and question stories before sharing. The goal is to act thoughtfully, not react mindlessly to fake news trickery.

7. Consider the photos. Fake news stories often contain manipulated images or videos. Sometimes the photo may be authentic, but taken out of context (author’s note: I once caught this being done with a political meme!). You can search for the photo or image to verify where it came from if you do a little sleuthing. NPR recommends doing this by doing a reverse image search in Google.

8. Inspect the dates. False news stories may contain timelines that make no sense, or event dates that have been altered.

9. Check the evidence. Check the author’s sources to confirm that they are accurate. Are there quotes? Who is quoted? Did they link to a source that actually backs up the story’s claims? Lack of evidence or reliance on unnamed experts may indicate the story isn’t real news.

10. Look for other reports of the same story. If no other news source is reporting the same story, it may indicate that it’s not for real. If the story is reported by multiple sources you trust, it’s more likely to be true.

11. Is the story a joke (literally)? Sometimes fake news stories can be hard to distinguish from humor or satire (The Onion, for example, or the Borowitz Report). Check whether the source is known for parody, and whether the story’s details and tone suggest it may be just for fun. If you’re not sure, maybe check out Wikipedia’s list of satirical news sites from all over the world.

12. Remember: some stories are intentionally false. Although we all like to think everyone has good intentions, the reality is that not everyone does. Think critically about the stories you read, and only share news that you know/or are pretty darn sure is credible.

Got it all down? If you’d like a handy list of questions to ask yourself or to share with your kids? Check out this one  (also below) from The News Literacy Project.

Showtime® on sale for $6.95 a month, Twin Peaks is back
Scam Alert: DocuSign phishing attack