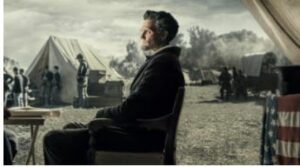 On the History Channel, experience the extraordinary life of Abraham Lincoln like you’ve never seen it before. From executive producer Doris Kearns Goodwin comes the three-night documentary event that uncovers Lincoln’s rise from poverty to becoming president of a nation tearing itself apart.

“Abraham Lincoln” will be a definitive biography of the 16th president, the man who led the country during its bloodiest war and greatest crisis. “Abraham Lincoln” is based upon Kearns Goodwin’s New York Times bestseller, “Leadership: In Turbulent Times.”

From the impoverished childhood of Lincoln (played by Emmy-nominated actor Graham Sibley) to his days as a young prairie lawyer and budding politician, through his unlikely election to the presidency and his assassination only five days after the end of the Civil War, “Abraham Lincoln” offers viewers new and surprising insights into the man consistently ranked by historians and the American people as the country’s greatest president.

Cheryl McCollum is a blogger for TDS.
View all posts by Cheryl McCollum →
Fiber inventions and the nail gun have TDS ties
Explaining NFTs and what makes it different than cryptocurrency