If you are 45 or older, you probably remember a time when there were no wheelchair ramps on the streets or in buildings, and when buses, trains, and bathrooms were not accessible to people with limited physical mobility.

Thanks to the signing of the Americans with Disabilities Act 30 years ago, people with disabilities are far more able to participate fully in all aspects of society. One fundamental principle of the A.D.A. is that individuals with disabilities who want to work and are qualified to work must have an equal opportunity to work. Prior to the A.D.A. being put into place, this was not the case in the United States. 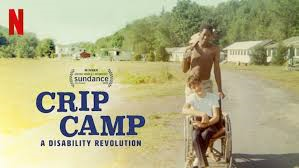 Disability rights activist Jim LeBrecht was born in 1957 with spina bifida and has used a wheelchair his entire life. His experiences, and the lives of other future disability rights leaders, are featured in the award-winning Netflix documentary, Crip Camp: A Disability Revolution. Important note: “Crip” is still considered a slur when used by nondisabled people; some disability rights proponents have “reclaimed” word. Their intention of calling themselves by this name is based in the idea that disabled people can be openly disabled and still be deserving of respect.

The film kicks off at Camp Jened, a summer camp for people with disabilities. This camp, unique at the time, was based in the Catskills of New York. Several of the campers and counselors later became disability rights activists including Judith Heumann and Bobbi Linn.

LeBrecht talks about how the camp “changed the world” for him.

“Back in the 1960s, the barriers were all over the place,” said LeBrecht. It wasn’t until the middle of first grade when he was “allowed” to enter the public school, but only on a trial basis. “I remember a time when I never saw anyone who looked like me in the world.”

For so many of the campers it was the first time someone, other than their parents, took care of them, LeBrecht said. “What we saw at that camp is that our lives could be better. We were brothers and sisters at camp and we all I had to learn how to fit into this world that wasn’t built for us.”

Fellow camper Judith Heumann, also a lifelong advocate for the rights of people with disabilities, recently presented a TED Talk and discussed how far we have come in the United States and how far we still to have to go in advocating for full accessibility and acceptance for persons with disabilities.

Four decades ago, Heumann co-lead a groundbreaking protest called the Section 504 sit-in — in which disabled-rights activists occupied a federal building in San Francisco for almost a month, demanding greater accessibility for all.

Heumann had polio at the age of 18 months and has used a wheelchair most of her life. She said the disabled had to be their own advocates when it came to the Americans for Disability Act.

While today you may not be impacted by this groundbreaking A.D.A., Heumann said, please know that “disability is a family that anyone can join at any time in their life.” To this point, one local disability rights advocate described all of us as being “temporarily abled.”

While the perseverance to enact the A.D.A. was intense and took years, Heumann said she learned to fight for the A.D.A. from others. “We certainly learned a great deal from the Civil Rights Movement and the Women’s Rights Movement.”

Heumann said she will never forget what President George H.W. Bush said after he signed the A.D.A. into law: “Let the shameful wall of exclusion finally come tumbling down.”

Cheryl McCollum is a blogger for TDS.
View all posts by Cheryl McCollum →
1Gigabit speeds now available in Arvada, Colorado
TDS.net email log in has changed