What TDS cable market is home to the most beloved bear, Smokey?

If you guessed Capitan, New Mexico, you’d be right.  Not only was Smokey Bear born in this village, but he is also buried there.

Originally, Smokey Bear was a character in a 1944 advertising campaign to raise awareness of our national forests and the valuable resource they pr 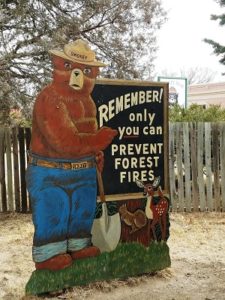 The story of how a cartoon-character bear turning into real life began on May 4, 1950 when a carelessly discarded cigarette started the Los Tablos blaze in Lincoln National Forest in New Mexico. On May 6, a second fire known as the Capitan Gap fire was also started by humans in the same general area. Together, these fires destroyed 17,000 acres of forests and grasslands.

On May 9, a fire crew brought in a badly singed bear cub. They found the frightened cub clinging to a burnt tree. He was badly burned around his legs and his feet and was first given the name “Hotfoot Teddy,” a name that soon changed to Smokey Bear.

After being treated at a veterinary hospital, a local game warden kept Smokey at his home for a short while.  He later moved to the National Zoo in Washington, D.C., where he lived for the remainder of his life.

The popularity of the “Only You Can Prevent Forest Fires” campaign slogan grew after the inclusion of Smokey Bear.

Today, there are many references to Smokey Bear in the village of Capitan, including a Smokey Bear Boulevard, and a Smokey Bear cafe filled with Smokey memorabilia and decorations.  Capitan is located north of the Lincoln National Forest between the Capitan and Sacramento Mountains at an elevation of 6,530 feet, with a population of 1,443. 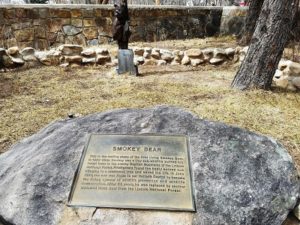 In 1960, a Smokey Bear Historical Park museum opened in the village. The museum features a documentary about Smokey, photos of the bear cub and a small park with interpretive exhibits on Smokey and the fire prevention campaign.  When Smokey died in 1976, he was returned to Capitan and is buried in the museum’s outdoor park.

Every year, Smokey Bear Days is held in Capitan the first Friday and Saturday in May. The event includes a costumed Smokey Bear, ecology booths, chainsaw carving artists, birthday cake, live music and a parade.

Second in popularity to only “Santa Claus,” Smokey lived to the ripe old age of 26.