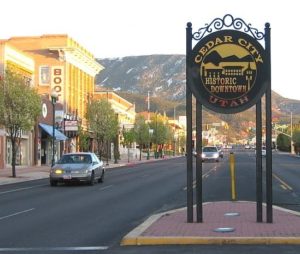 ith mountains to the east and the vast Mojave Desert to the west, Cedar City, Utah offers visitors a great home base for exploring Southwest Utah. Located 250 miles south of Salt Lake City, it’s promoted as the “gateway to the parks,” because it’s a one-hour drive to Zion National Park, 90 minutes to Bryce Canyon and three hours to the North Rim of the Grand Canyon.

A few miles east of Cedar City is Cedar Breaks National Monument, which sits at more than 10,000 feet and looks down into a half-mile deep and three-mile across geologic amphitheater. The views are splendid and include multicolored cliffs, spires, pinnacles and other geologic formations of red, orange and white rock landscapes. 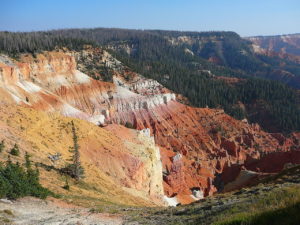 Cedar City is also home to Southern Utah University with 8,800 students. In June, the college helps hosts the Utah Summer Games, a sports festival for athletes of all ages and abilities.

Just north of Cedar Breaks is Brian Head Ski Resort, which has an annual snowfall of more than 360 inches. The resort has Utah’s highest base elevation at 9,600 feet and includes 71 runs and eight chair lifts.

In 2000, Cedar City’s population was 20,527 and has grown to 30,184 today. Cedar City’s economy is based on tourism, agriculture, some mining activities, some industrial and space-age complexes and Southern Utah University.

History of Cedar City
You can find evidence of prehistoric people in the Cedar City area by rock art found in Parowan Gap located to the north. The artwork is dated to AD 1000 and 1300.

In 1776, ancestors of the present-day southern Paiute Indians met the Dominguez-Escalante Expedition in this area. Fifty years later, in 1826, mountain man and fur trader Jedediah Smith traveled through the area exploring a route from Utah to California. Smith’s explorations and documented travels were important resources for expansion to the American West.

Cedar City was originally settled in late 1851 by Mormon pioneers originating from Parowan, Utah. The pioneers were sent to build an iron works mine. The vast iron deposits and coal resources are up Cedar Canyon. In 1855, a new site, closer to the iron works and out of the flood plain of Coal Creek, was established at the suggestion of Brigham Young. Present day Cedar City is located at this site.

2 Responses to Spotlight Cedar City, Utah: Gateway to the Parks