By Cheryl McCollum on December 31, 2020 in Entertainment, News 0

Around the world, cultures welcome the change of the calendar with unique New Year’s Eve traditions of their own. Here are some customs around the world to bring in the new year. (Check out the especially fun tradition in Colombia.)

Australia
Like many countries around the globe, Australians celebrate the new year with fireworks.

Brazil
In Brazil, as well as other Central and South America countries like Ecuador, Bolivia, and Venezuela, it is thought to be lucky to wear special underwear on New Year’s Eve. The most popular colors are red, thought to bring love in the new year, white for good luck, and yellow, which is thought to bring happiness and money. Because Brazil is in the southern hemisphere, it’s summertime, so the weather is generally warm.

Colombia
In hopes of a travel-filled new year, residents of Colombia carry empty suitcases around the block at the start of the new year.

Denmark
Residents of Denmark greet the new year by throwing old plates and glasses against the doors of family and friends to banish bad spirits. They also stand on chairs and jump off them together at midnight to “leap” into January in hopes of good luck. 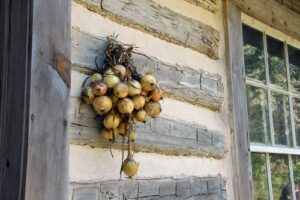 Greece
In Greece, an onion is traditionally hung on the front door of homes on New Year’s Eve as a symbol of rebirth in the new year. On New Year’s Day, parents wake their children by gently tapping them on the head with an onion.

Japan
The new year is special in Japanese culture as it is considered a time to pray for one’s family.

In Finland, everyone receives a small piece of tin in the shape of a miniature horseshoe. The horseshoe is melted and placed into a container of water. The shape of the resulting cast is interpreted after hardening. A heart or ring means a wedding, a ship predicts travel, a coin means wealth, and a pig declares there will be plenty of food.

Panama
To drive off evil spirits in the new year, a tradition in Panama is to burn effigies (muñecos) of well-known people such as television characters and political figures. The effigies are meant to represent the old year.

Philippines
You’ll find round shapes all over the Philippines on New Year’s Eve as representatives of coins to symbolize prosperity in the coming year. Many families display piles of fruit on their dining tables and some eat exactly 12 round fruits (grapes being the most common) at midnight. Many also wear polka dots for luck.

Scotland
Scotland’s New Year’s Eve celebration of Hogmanay is called a “first-footing”—the first person who crosses a threshold of a home in the new year should carry a gift to the family for luck. Scots also hold bonfire ceremonies where people parade while swinging giant fireballs on poles, supposedly symbols of the sun, to purify the coming year.

In South Korea, Seoul celebrates the ringing of Bosingak bell 33 times at midnight and fireworks. In Pyongyang, North Korea, the chimes of the clock at the Grand People’s Study House and the national fireworks display signals the start of the new year. 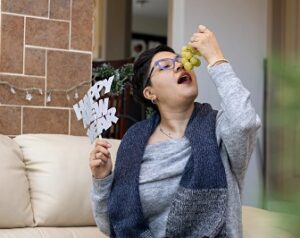 Spain
In Spain, it is customary to eat 12 grapes – one at each stroke of the clock at midnight on New Year’s Eve. Each grape represents good luck for one month of the coming year. In bigger cities like Madrid and Barcelona, people gather in main squares to eat their grapes together and pass around bottles of cava.

United States
Traditions in the United States include singing “Auld Lang Syne” to greet the New Year and the eating of black-eyed peas for good luck.