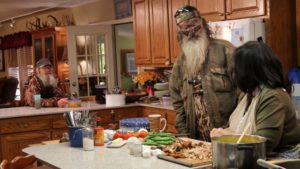 The end is in sight for A&E’s Duck Dynasty.

The network announced Wednesday night that after five years and 130 episodes, the unscripted series will come to an end. The current 11th season will be its last. This season runs through Jan. 18, with a small break, followed by the final seven episodes that will air from March 1 through April 12. A series of holiday specials are also likely to come later.

The series ranked as the most-watched nonfiction series in cable history and, according to A&E, remains the No. 1 series on the network among total viewers.

The announcement was made Wednesday night during the season 11 premiere with a message from the Robertson family.

“After five years, we’ve decided as a family for this to be the final chapter of the Duck Dynasty series,” Willie Robertson said in the video that included other family members.