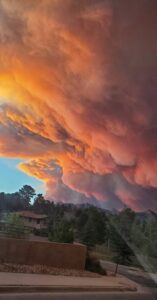 Thursday, Oct. 22 marked an unprecedented day in the TDS cable community of Estes Park, Colorado. For the first time in its history, the entire town underwent mandatory evacuation orders due to the Cameron Peak Fire and the East Troublesome Fire Thompson Zone. Estes Park was  in “imminent danger” and residents were ordered to “evacuate the area immediately and as quickly as possible. Do not delay leaving to gather belongings or make efforts to protect your home or business.”

Nearly a week later, Cameron Peak Fire officials started allowing residents to return to the west side of town and lifted all mandatory and voluntary evacuation orders on Nov. 2.

StarPoint asked its employees who live in Estes Park to tell their story about what it was like to be part of this harrowing experience.

Maverick Viator, Financial Services Advisor – Processor
How you are doing?
I am doing much better mentally.  The eight days of evacuation in a hotel, watching the news as the fires were getting closer, seeing homes destroyed and not knowing if this would happen to you was deeply horrifying. It was difficult not knowing when this would end

What was the experience like for you?
It was my first experience dealing with evacuation orders from a forest fire. I was definitely very nervous. It all happened very quickly. When I received the text to evacuate, I panicked. I immediately emailed attendance line, signed off, and started packing. I was so afraid that I could not think of what I should pack. It’s something I cannot explain. I finally started packing my car, and then I saw my neighbors rushing in a panic mode to leave as well. I could hear my neighbor having a panic attack and this made me panic more. I finally got everything in my car and began my journey out of Estes Park.

How difficult was it to drive away from Estes Park?
The drive brought on more fear and anxiety. Every road was bumper to bumper — full of tourists and locals. There was only one gas station that was open. The lines to get gas were very long. My thought was, will I get out of Estes before the fire rolls into town?  After it seemed like hours, we finally got out of Estes and were heading down the canyon to safer grounds, Once I started down the canyon, I begin to feel much more calm as I knew I was out of Estes and out of danger.

What does it look like in Estes Park now?
Most of the fires are contained due to the recent snow fall, but still burning. You can see the burnt forest on the other side of the mountains. Such beautiful forests are completely scorched.

Finally, what items did you make sure you took with you when you were evacuated?
I took clothes, medication, toiletries, passport, and important documents. 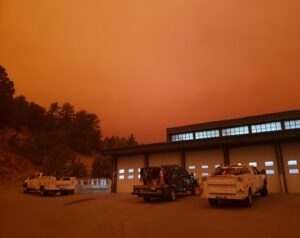 Brandon Boles, Consumer Sales Representative – Retail
Things are good now. It was wild on Thursday, Oct. 22 when we were evacuated. The skies were a smoky orange and dark maroon. I remember checking Twitter early in the morning and seeing the East Troublesome Fire had grown by over 100,000 acres in about a 15-hour span overnight. I couldn’t believe it.

The experience was interesting. Our family (I still live with my parents) and I made sure to have our bags ready to go. When I left the office to go home for lunch, that’s when the evacuation orders came down, so I called my supervisor, Debbie Hernandez, and informed her my home and the office were in mandatory evacuation orders. It felt like the apocalypse was coming. It was midday and the skies were so dark, but once we arrived in Loveland and to the hotel, we all felt much better. But we were still very nervous because my brother works for the Light & Power Department for the Town of Estes Park and he had to stay in Estes because he is an essential worker. It was nerve-racking because you were hoping the fire would slow down and not hit our town. Thankfully, it didn’t!

How difficult was it to drive away from Estes Park?
Estes Park is my hometown. We never thought the fire would wipe it out, but it was still scary. People in other neighborhoods had been evacuated for a month and longer, so we weren’t sure how long we would be away from home. Thankfully it was just a few days.

What does it look like in Estes Park now?
You can’t see the damage now. The smoke is leaving, and the fires haven’t grown. It’s nowhere near as smoky, hazy, or as poor of air quality as before the evacuation.

What did you take with you?
I took simple stuff — about five days’ worth of clothes, my important documents, phone, computer, and tablet. I also took my signed Dalton Risner jersey. Dalton is a football player for the Denver Broncos. I know his father who is the head football coach at Wiggins High School in Colorado. I covered them when I was the sports reporter at the Fort Morgan Times. I also covered Dalton’s collegiate career at Kansas State and interviewed him for stories when I worked there.

Deb Thelander, Senior Customer Care Operations Support
Life is getting back to the new Covid ‘normal.’

I spent my first 45 years living in Nebraska’s tornado alley and near rivers that flood every spring. I was always ‘dodging the bullet’ as the saying goes. When I lived in Lincoln, Nebraska, I sold my house moved to a different neighborhood, and three months later that home was damaged by a tornado. Stuff like that has happened more than once to me! My husband and I have lived in Estes since 2003 and during the flood of 2013 my neighbor next door had a river running through his lower level for a full week, while we were dry as a bone. We were also part of another fire that came through Rocky Mountain National Park. In that fire about 12 homes and one out-building were lost, but our home was fine.

This time, we evacuated to my daughter’s house in Loveland. We experienced a warm, welcoming place instead of what others experienced in shelters and hotel rooms, plus I was able to spend time with my two granddaughters.

I feel I am very blessed. When we evacuated from Estes Park, I felt like everything would work out. As luck would have it, the snow came just in time. This has been another incredible adventure that hopefully I will be able to share with my great-grandchildren someday.

What does it look like in Estes Park now?
I know with the warmer weather the fire could pick up again. There are road signs ‘fire danger, be prepared’ as a constant reminder. The damage is deep into the park, so we can’t see it.

What did you take with you?
Two very precious framed photos that could not be replaced, my favorite jammies, and the kitchen wall clock that belonged to my deceased mother.

Combined the Cameron Peak Fire and the East Troublesome Fire burned more than 400,000 acres. While the fires are still burning, recent winter storms helped slow the growth of the fires.  Firefighters continue to monitor and manage the fire.

Cheryl McCollum is a blogger for TDS.
View all posts by Cheryl McCollum →
Use Up Leftovers Within Four Days (Or Freeze Them)
TDS now offering 1Gig speeds in Alpine, Texas