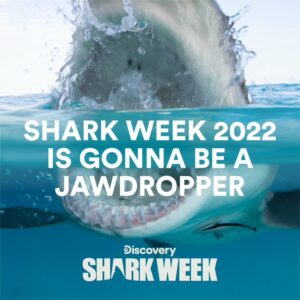 This is the moment you’ve been waiting for… SHARK WEEK is about to get your heart pumping with 25 hours of new shows featuring never-before-seen footage of walking sharks, groundbreaking findings, and more mega breaches.

Plus, as the first-time Master of Ceremonies, Dwayne “The Rock” Johnson will kick off Shark Week’s historic 34th year. Additional special guests during the week include Tracy Morgan, Sal Vulcano, James Murray, Brian Quinn, and the cast of “Jackass”.

Shark Week starts July 24 on Discovery and discovery+. Love listening to podcasts? Shark Week: The Podcast can be found here.

Stream Shark Week and so much more with a heart-pumping good deal. For a limited time, get discovery+ for $0.99/mo for your first 2 months. Terms apply. See discoveryplus.com for details.

Here are some videos for Shark West to get your heart pumping!

What is a Pocket Shark?

Of the roughly 50 shark attacks reported every year, what percentage is actually fatal?

Only 10%. Dying from a shark attack is very rare simply because sharks don’t really want to eat humans. Most shark bites aren’t followed by a second bite.

How many tons of meat does the average adult great white have to eat every year?

To sustain their massive size, body heat and constant movement, great whites must eat an average of 11 tons of meat each year.

A bull shark is one of a few shark species that can survive in both salt and fresh water. Most sharks would fill up like a water balloon in a lake or river.

Humans kill up to 1 million sharks each year. True or false?

A million sharks doesn’t even scratch the surface. It’s estimated that humans kill about 100 million sharks annually – a number that is far from sustainable.

How many species of shark are known to attack humans?

Of the more than 400 known species of shark, only 23 of them have ever attacked a human without being provoked first.

A great white shark’s bite is more powerful than a lion’s.

At up to 40,000 pounds per square inch of pressure, a large great white shark’s bite is twice as powerful as a lion’s.

Cheryl McCollum is a blogger for TDS.
View all posts by Cheryl McCollum →
Escape the summer heat with these movies!
TDS named Best Place to Work for Disability Inclusion