What’s your favorite Christmas movie? Does it match what the residents who live in your state like too?

Yes, it’s true. The team at CableTV.com took the top 20 Christmas movies ranked by American Movie Classics (AMC) and then cross-referenced it with Google Trends. They came up with a state-by-state analysis of the most popular movies in each state.

One interesting tidbit is that the favorite movie in four states take place in the setting as the movie or where it was filmed;

So what are people watching this Christmas season in your state?

Here are the most popular Christmas movies in all 50 states, including the District of Columbia. 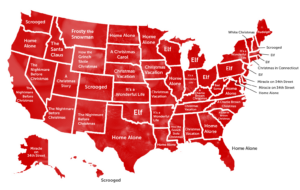 Cheryl McCollum is a blogger for TDS.
View all posts by Cheryl McCollum →
Best ways to eat your Thanksgiving leftovers
Channel lineup change in Jal, NM