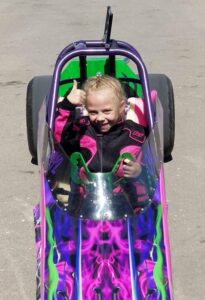 Most of us have fond childhood memories of spending time outside, playing sports and running around with friends. However, Destiny (13) and Braylie (9) have found a passion for a past-time that may not seem common for kids—drag racing.

Destiny and Braylie are the grandchildren of Patrilla who has been working as a field service assistant with TDS for nearly 30 years. Patrilla works and lives in the Hobbs, New Mexico, area and enjoys supporting the girls as they travel around state and region for races.

Although the sisters are fresh into their drag-racing journey, they already have an impressive list of accomplishments. Destiny, who started competing four years ago, placed first in three races last year and has already won another race this season. And Braylie, who only started racing this past year, placed second four times and earned first place twice. If these accolades aren’t enough, the girls have raced on the same no-prep tracks as the professional racers on the Discovery reality show, Street Outlaws. “The pots [winnings] for no-prep races are higher because they don’t prepare or clean the tracks for us,” Braylie noted.

The girls grew up hunting and playing sports, with Destiny playing softball, basketball, and track, and Braylie competing in gymnastics. They were first introduced to drag racing when their parents took them to a race. While Braylie was immediately interested, Destiny beat her to the punch by getting her car first.

These two adventurous, young girls thought it might be fun to try out a sport their friends had never heard of and they fell in love with it. While they started out racing all over Texas with the Southwest Junior Dragster series, the sisters now mainly compete at the track in Odessa, Texas, or back in Hobbs.

In a race that only lasts 8 seconds, it’s all about getting the speed and positioning right. The track is a quarter mile straight shot and each race is done between two cars, with speeds ranging from 75 – 85 miles per hour. Compared to the sports they grew up playing, drag racing is more individualized with the young drivers manning their own in the cars. The don’t even use earpieces to receive last minute pointers from their dad. 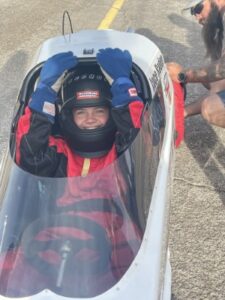 With the help of their father, Destiny and Braylie have taught themselves a lot about racing and different techniques. Driving a dragster is a learned skill, and both girls have spent a lot of time on and off the track learning the lights, practicing their timing with starts, and slowing down for their turns.

“In this sport, you’re really competing with yourself, because as long as you’re doing what you need to on your end, then the car will do what it’s supposed to, so everything really rides on the individual,” Patrilla said.

Aside from acting as a pit crew for the girls, their family has been helpful in all aspects of the sport. “They always encourage us or give us that extra boost of confidence if we need help. My dad preps my car and makes sure it’s running right,” Destiny said. Braylie recalls, “One time my brake wasn’t working, and we couldn’t stop, so my dad did everything he could to help.” And as the two grow with the sport, they constantly need new gear like fire suits, fire shoes, helmets, and sometimes new cars, which means relearning their techniques since each car is very different.

The girls and Patrilla liken the drag-racing community to one big family. Rather than it being a cut-throat environment, the sport focuses much more on encouragement and friendly competition. “We had a rim that kept puncturing our tire, and this guy was like ‘I have a car in the trailer that I’m not using’ and he pulled off the rims and gave them to us,” Patrilla said. Outside of the track, the families are all cooking food, eating together, and socializing.

Since most races are staggered starts rather than age brackets, Destiny and Braylie, again who are just 13 and 9 respectively, are racing (and often winning) against 17-year-old boys and girls. However, Patrilla reassures me the age gaps are not intimidating to them.

“There are actually a lot of girls that race,” Braylie shares about what may be regarded as a male-dominated sport. “While it sounds competitive and is competitive, most people probably don’t think sportsmanship when they think of drag racing,” Destiny noted.

“If one of the girls’ cars go down, everybody is working to get the car back up. Braylie flipped her car last year,” Patrilla shared, to which Braylie giggles and exclaims, “Only onto the side!” Patrilla recalled how other junior racing parents were bringing out tires and other car parts to help get her back on the track.

While both girls have years to see where drag racing takes them, Destiny dreams of racing with the National Hot Rod Association (NHRA), better known as the NASCAR of the drag-racing industry. But for now, they are just enjoying the sport and all it brings to them on and off the track. TDS is proud to sponsor these amazing drag racers.

View all posts by HelloTDS →
Job hunting? Look out for phony job postings
It’s time for some July 4th trivia