My grandfather, Edgar D. McCollum, was a private in World War I and in France near the front lines when the ceasefire became effective at 11 a.m. – it was on the 11th hour of the 11th day of the 11th month – Nov. 11, 1918. He served in Company F, 108th Engineers, 33rd Division. His company built bridges, put roads back together and served during the Meuse-Argonne Offensive.

Building bridges meant most of his company’s work was done in swamps and rivers. If you add marching for miles, and boots that didn’t fit — few did, his feet really took a beating during the war. I still remember watching him tape and bandage up his feet every other night — all because of ill-fitting boots.

Like so many, my grandfather rarely talked in detail about his war experience. He would say, “War is hell” and urged our generation to avoid it at all cost.  Fortunately, a few of the individuals in his company compiled a book on the comings and goings of his company during the war called History of Co. “F”, 108th Engineers, 33rd Div., compiled and edited by 1st Lt. Robert P. Richards and Sgt., 1st Class, John R. Beall. The book provided our family with some real insight into how he spent 18 months of his life. 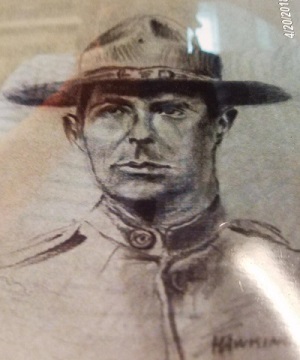 Most of the recruits from Company “F” came from the Chicago area. My grandfather was 23 years old when he went to training camp in Camp Logan, Texas in January, 1918.  The war interrupted his studies at the University of Wisconsin-Madison.

After training camp in Texas, they traveled to Camp Merritt, New Jersey. Their regiment sailed on May 8 from the Port of Embarkation in Hoboken, New Jersey, and arrived in Brest, France on May 18. Company “F” included four officers and 243 men.

During July and August, the entire regiment constructed the final defense line in Amiens, France, located 75 miles north of Paris. His company dug trenches, installed bands of barb wire for the front line and constructed a Calvary track for the war horses. During construction they endured shell and machine gun fire.

At the end of August, they trained and prepared for the Battle of Verdun at the American front. They spent weeks building roads and bridges on the banks of the Meuse River and over Forges Creek, all  necessary for the transportation of ammunition and supplies. His regiment came under shell fire, and gas attacks. Many days, they endured 400 to 500 shells overhead.

On Sept. 10, 1918, his regiments moved north near the area known as Dead Man’s Hill, where more than a million people were killed. During this time, they built four bridges each 200 yards in length, using mostly salvage material from the German dumps.

For the next eight weeks, they fought through the Argonne, in the woods and over the hills, west of the Meuse River.  My grandfather would say his regiment’s work of road repairs and bridge work was more tiresome than hazardous.  They fought in this area until early November when the Germans retreated and later signed the armistice. 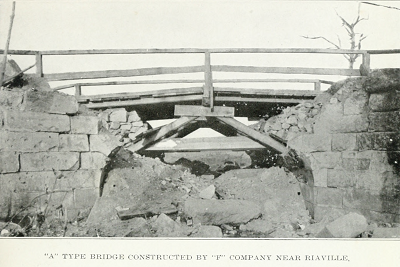 A type of bridge constructed by Company F in northern France during World War I.

His company stayed in France for about a month following the war. They mostly made road repairs and were ordered to feed the Italian and Russian prisoners of war that were released in the area by the Germans.  In late December, they traveled to Luxemburg until they received their orders on May 15 to go home on the U.S.S. Harrisburg. They arrived back in Chicago on June 5 and marched down Michigan Avenue to cheering crowds.

When the war ended, the job market was flooded and there were few available jobs. My grandfather decided to re-enroll at UW-Madison in the fall of 1919. The GI Bill came after World War II, so he paid for college by waiting tables at the State Capitol in Madison, Wisconsin.  He graduated four years later with degrees in chemistry. He met my grandmother in Madison where she taught chemistry at Madison East High School. They moved to Chicago where he worked in the printing business.

When my grandparents were in their late 60s, they traveled to France and visited the sites where my grandfather served. That trip provided my grandparents a great deal of solace and provided him the opportunity to talk about the war with our family.  My grandfather died in 1991 at the age of 98.

TDS Employment Opportunities
TDS is dedicated to recruiting America’s military talent. This includes people transitioning from active military and veterans to those currently serving in the National Guard and as Reservists. A career at TDS gives you the opportunity to put your military experience and education to good work at one of the nation’s largest telecommunications companies. Learn more about TDS job opportunities.