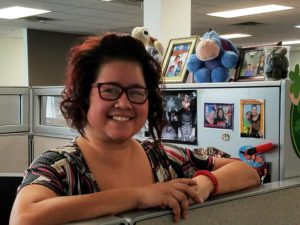 It took a just a few months before the art of painting, hiding and finding rocks swept across Alamogordo, New Mexico in full force. TDS employee Marina Corona is one of several collaborators of this new craze and she’s enjoying every moment of this unique outdoor treasure hunt.

“It’s been so much fun,” said Marina, who works as a sales coach in the Alamogordo office. “The variety and artistic talents of people painting rocks has been so amazing. Most of the community is loving it.”

In October, Halloween-themed rocks were in abundance all over town and in early November, there were about 200 rocks painted with flags on them in honor of Veteran’s Day. At Christmas, the group handed out holiday-themed rocks at the Alamogordo Christmas Parade.

The Alamo Rocks Facebook page was started by two local residents in the summer of 2017. Marina helps as an administrator of the Alamo Rocks Facebook page. Since then, more than 4,000 members have joined the page. Members post photos of the rocks they’ve painted and are asked to post photos of the painted rocks found around this TDS cable town of about 32,000 people. The number of posts is into the thousands.

Individuals of all ages paint the rocks and then hide them all around Alamogordo. When you find a rock, you can either re-hide it or keep it if you like it. If you decide to keep it, you are asked to paint another rock and hide that one around town. 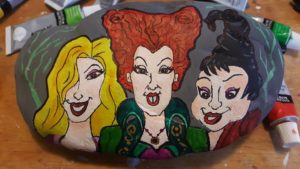 A story about the painted rocks was printed in the local newspaper in September. The Alamogordo Public Library now hosts rock painting parties at the library.

“It’s become a fun event for my family,” said Marina. “It’s something that has really grown in popularity.”

Marina has two children. Her 11-year-old daughter paints rocks with her, along with about 10 nieces and nephews. “My daughter has a lot of fun with it,” she said. The cousins meet to paint and hide the rocks around town. “It’s bringing us back together.” 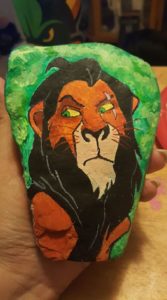 Marina enjoys painting cartoon characters on the rocks. Others in the group are skilled landscape artists and some enjoy adding sparkles and gluing unusual items such as buttons onto their rocks. Themes vary, but don’t be too surprised when an animal-themed rock is found at the Alameda Park Zoo.

While Marina said some businesses are open to hiding rocks on their property, the group’s Facebook page asks residents to focus on hiding rocks in public areas. Before hiding a rock at a business location or its parking lot, they ask the rock painters to get permission from the business first.

Marina has lived in Alamogordo since she was 11-years-old. “I love Alamogordo,” she said. “It’s a good place to raise my kids.”