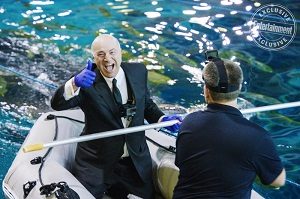 In one of the marquee specials of Shark Week 2018, Mark Cuban, Kevin “Mr. Wonderful” O’Leary, Barbara Corcoran, and Daymond John will have more literal skin in the game than they ever have when they move from the tank to the water to learn all about actual sharks, EW has learned exclusively.

Shark Tank Meets Shark Week features the stars of the ABC reality competition each pairing up with an oceanic organization to receive an education in the issues facing those misunderstood predators of the sea, ranging from habitat destruction, overfishing, and bycatch. The Sharks (minus Lori Greiner) will then return to the Shark Tank set, where they will reunite with fellow Shark, Robert Herjavec, and pitch each other as to why their organization deserves a $50,000 donation. Each Shark will then cast a vote for the organization that is most deserving of the money. Sorry, Mr. Wonderful, you can’t vote for yourself in this contest.

This is the 30th installment of Shark Week, Discovery’s popular summer franchise. The festivities kick off Sunday, July 22 and last for eight days.