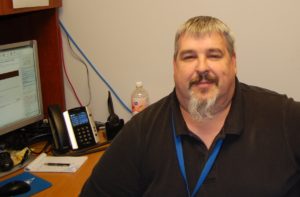 Since the ocean covers 71 percent of the earth, TDS’ Doug Rees, network specialist, knows that if you want to see the world, you need to learn to scuba dive.

“When people go to the ocean, they mostly see the water,” says Doug. “When I go scuba diving, I see everything underneath. ”

For 17 years, Doug has worked in TDS’ St. George, Utah office. Outside of work, he spends his time scuba diving — his real passion. He is a Dive Master and a Master Diver. According to Doug, not a lot of people have both and fewer than two percent of divers are Master Divers.

When one thinks of scuba diving, the vast desert regions of the American southwest usually don’t spring to mind. However, southern Utah is actually filled with several choice water bodies. They draw divers from all across the country, be it novices, experts or anyone in between seeking a different type of scuba adventure from diving in the ocean.

Divers head to places in Utah like Lake Powell, Fish Lake, Quail Creek Reservoir, and the Sand Hollow Reservoir. Sand Hollow is the biggest dive park in Utah with underwater obstacles of a Cessna 310 airplane and a VW bus and where visitors can rent scuba gear at Dixie Divers’ Dive Shack.

Doug works with the Dixie Divers in St. George and serves as a Dive Master on their lobster diving trips in California. “I’m a glorified lifeguard on these trips,” he said, adding that he stays on the boat and makes sure the divers are safe on their dives.While Doug has been scuba diving all over the world, he says Roatàn, Honduras is “The best dive spot in the world.” Roatàn Island rests on an exposed ancient coral reef, rising to about 890 feet above sea level.

“The reef is just beautiful,” he said. “The plants are so incredible. It’s a great place to dive.”

Doug also recommends diving in Belize and enjoys the reefs in Cozumel.

“No matter how many times you dip beneath the water, you never know what you’re going to see,” said Doug.

When asked about his favorite part of scuba diving, Doug quickly says, “It’s diving at night when some of the animals are more active. Plus, the artificial light of a diver’s head lamp makes the colors of the coral reefs more vibrant.”

On a night dive, you are more aware of your surroundings, since you can only see what’s in the beam of your light. “I really appreciate the darkness and the unknown that surrounds me,” Doug said. “I find I’m pretty fearless when it comes to diving at night.”

Along with scuba diving and working at TDS, Doug is working on getting his pilot’s license and dabbles in the world of Bitcoins.

Give ‘Em What They Want: The Small Perk with the Big Payoff
HBO, Cinemax preview weekend, April 21-24