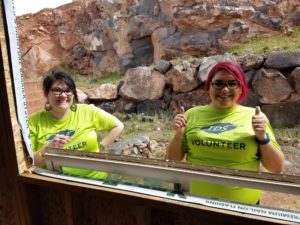 TDS associates had a terrific day volunteering at the Habitat for Humanity of Southwest Utah construction site in Hurricane, Utah. The group spent an afternoon in March working on roof trusses and installing windows. The local Habitat chapter is currently building its 22nd home in Southwest Utah.

Along with pounding nails for the local non-profit, TDS employee Dennis Knipfer, commercial accounts executive, serves as a board member of Habitat for Humanity of Southwest Utah. Dennis has been with TDS since October, 2012 and has served on the Habitat for Humanity local board since 2015.

Dennis says he enjoys volunteering with Habitat because he sees the positive outcome a home means for a family. “Habitat really does fulfill the American Dream,” Dennis said.

In New Mexico, TDS’ Stuart Roberts (pictured far right),  manager, Field Marketing, serves as a member of several local boards and community organizations. To name a few, Stuart is a member of the Carlsbad Chamber of Commerce, past president of the Southwest Cable Communications Association and a member of the Economic Development Corporation of Lea County.

Sponsoring a team of cooks for the United Way of Otero County Chili Cook-off in New Mexico or a table at the Johnstown Milliken Annual Banquet in Colorado or home and garden shows, local sports team or a local musical festival or parade, it’s apparent that TDS and its employees are involved in their local communities. 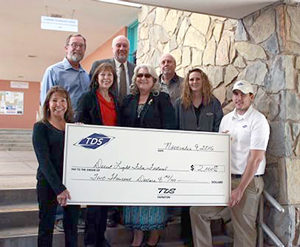 Cheryl McCollum is a blogger for TDS.
View all posts by Cheryl McCollum →
Spotty weekday forecast for Masters in Augusta, sun this weekend
Benefits of living simply – be more with less

2 Responses to TDS associates making a difference in their communities