TDS has been nominated for Best of Southern Utah. 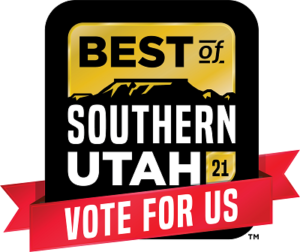 Voting ended March 8. Winner’s will be announced June 7, 2021 on the Best of Southern Utah website and in the winner’s magazine.

The 2021 Best of Southern Utah presented by Vasion is a vote based contest focusing on and highlighting the best businesses, companies, groups, locations, items and services in Southern Utah and parts of Mesquite, NV.

HOW DOES NOMINATION PROCESS WORK?
Nominations are provided by the community and after the nomination period is completed the names of nominated businesses, people and places in each of the nearly 200 categories will be finalized and make up our official 2021 Best Of Southern Utah voting ballot. At that point our audience is asked to vote on one choice in each category. Per our guidelines, voters are allowed to nominate without limits and once voting period has begun, one vote per 24 hours allowed. All voting is done online.