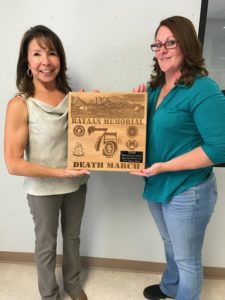 TDS was a proud sponsor of the 28th annual Bataan Memorial Death march, which took place at White Sands Missile Range, N.M., about 45 miles east of Alamogordo, N.M.  The memorial was held March 19, 2017, where more than 7,200 people attended the event.

The Bataan Memorial Death March is a challenging march through the high desert terrain of the White Sands Missile Range. The memorial march is conducted in honor of the heroic service members who defended the Philippine Islands during World War II, sacrificing their freedom, health, and, in many cases, their very lives.

“This is such an inspiring event,” said Barbara. “We have great respect for our military heroes that have made great sacrifices for our country.”

Since 1990, White Sands Missile Range has hosted an annual march, in honor of the heroic service members, who defended the Philippine Islands during World War II. Many of the soldiers defending Bataan were from New Mexico, which affected many New Mexico Families.

This memorial march is a challenging route that consists of paved road, sandy trails, and high desert in our great southwest New Mexico. The march has become one of the largest events of the year for people around the world.

“Being a part of this event and hearing the different stories of why people march is so inspiring, and humbling,” said Barbara. “I am very proud to run to honor the hero’s that made great sacrifices for our freedom.”

Below is a brief history of The Bataan Death March.

During World War II, the Battle of Bataan began on Jan. 7, 1942 and continued until April 9, 1942 when the USAFFE commander, Maj. Gen. Edward King, Jr., surrendered to Col. Mootoo Nakayama of the 14th Japanese Army.

The Bataan Death March started following the surrender when the Japanese forced 76,000 captured soldiers, Filipinos and Americans, to march approximately 60-70 miles across the Bataan Peninsula.

The marchers made the trek in intense heat and were subjected to harsh treatment by the Japanese guards. They had little or no food or water. Thousands perished in what is now known as the Bataan Death March.

The ordeal lasted 5 days for some and up to 12 days for others.

Those that did survive the march were taken to confinement camps. Here they were beaten malnourished and riddled with disease, 2/3 of the POWs died from the horrendous conditions. It wasn’t until 1945 that these prisoners of war would see freedom. Many died within their first year of freedom.

Benefits of living simply – be more with less
Give ‘Em What They Want: The Small Perk with the Big Payoff