One of the best parts about the holiday season are the many charming movies! Most everyone knows the classics, such as “Home Alone” and “Elf,” but what about some more obscure picks? Below are some underrated and unconventional choices that will brighten your holidays!

Starring starlet of the Golden Age of Hollywood, Judy Garland, this movie chronicles the year leading up to the 1904 Louisiana Purchase Exposition World’s Fair. Judy Garland’s rendition of “Have Yourself a Merry Little Christmas” is sure to get you in the holiday spirit.  Watch on Amazon Prime Video, Apple TV, Vudu, Redbox

Set against the backdrop of a New York Christmas in the 1950s, “The Apartment” tells the story of C.C. “Bud” Baxter (Jack Lemmon), a lonely insurance agent who is forced to choose between a promotion and his dream girl. Watch on Amazon Prime Video

This modern retelling of “The Prince and the Pauper” follows the story of Louis Winthorpe III, a wealthy broker (Dan Aykroyd), and Billy Ray Valentine, a street hustler and con man (Eddie Murphy), as they trade places during the holidays. Watch on Amazon Prime Video, Apple TV, Redbox, and Vudu

On Christmas Eve, NYPD Detective John McClane (Bruce Willis) hopes to rekindle things with his estranged wife. However, his takes a turn when he finds himself in the middle of a terrorist attack organized by the nefarious Hans Gruber (Alan Rickman). Watch on Amazon Prime Video, Starz, Apple TV, YouTube

While many may consider this a Halloween movie, this Tim Burton classic encapsulates the joy of the holiday season. Edward Scissorhands (Johnny Depp) is a lost humanoid with scissors for hands. When the Boggs family takes him in, he is shown love for the first time. Watch on Disney+, Prime Video, Philo, Vudu, Redbox, Apple TV

Brad and Kate, played by Vince Vaughn and Reese Witherspoon, both come from dysfunctional families. When their plans to vacation in Fiji are canceled, they find themselves stuck spending Christmas with each of their four parents. Watch on HBO Max, Philo, Vudu, Prime Video, Apple TV, Redbox

A comedic retelling of an ancient European movie, “Krampus” tells the story of Max, a young boy who loses his Christmas spirit due to his broken family. However, when the horned demon Krampus visits the family, they band together to defeat the beast. Watch on Peacock, USA Network, SYFY, Bravo, OXYGEN, Telemundo, E!, Redbox, Prime Video, Apple TV 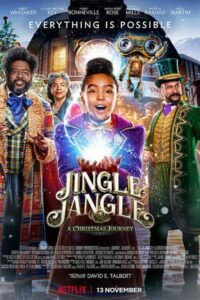 Abby (Kristen Stewart) and Harper (Mackenzie Davis) have been dating for nearly a year. When Harper invites Abby to spend Christmas with her family, Abby devises a plan to propose. However, her plans are thwarted when she learns that Harper has yet to come out to her family. Watch on Hulu

Here are some exciting new holiday releases to check out:

Lindsay Lohan returns to the screen in this holiday romantic comedy as Sierra, a spoiled heiress who experiences amnesia following a skiing accident. After falling off the side of a mountain, Sierra is discovered by Jake (Chord Overstreet), who nurses her (and her heart) back to health. Watch on Netflix

The Guardians of the Galaxy visit Earth to find the perfect Christmas present for Peter Quill (Chris Pratt), who is still heartbroken by the death of his girlfriend, Gamora. When the well-meaning yet misguided crew decides to kidnap Peter’s childhood hero Kevin Bacon for their gift, chaos ensues. Watch on Disney+

Each year, the Ghosts of Christmas Past, Present, and Yet-To-Come select one human soul to redeem for the holidays. When Will Ferrell, the Ghost of Christmas Present, stumbles across the grouchy Clint Briggs (Ryan Reynolds), he knows he must reform one more person before he can retire. Watch on Apple TV+.

View all posts by HelloTDS →
New channels to be launched on TDS TV+ in Texas, New Mexico and Colorado
Bucket List: Decorate a float for the Rose Parade