If your checklist for binge-worthy television is:

Is it set in the Wild West? Is it also set in the future? Does it have Cyborgs? Is Anthony Hopkins in it, playing a god-like mastermind?

If you said yes to one or all of those questions, then HBO‘s Westworld might be the show for you to watch. 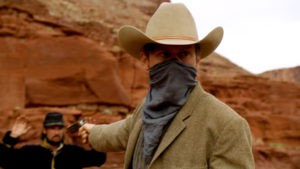 The premise
Westworld is the name of an amusement park that is full of human-like Cyborgs called “hosts.” Evan Rachel Wood and James Marsden play two of them. Like a play, each host has a part to play in the park’s many story lines. They’re programmed to perfection, creating elegant, lifelike interactions between one another, and even more importantly, visitors.

Set in an unspecified time in the future, people pay money to visit Westworld to immerse themselves in these narratives…or do whatever they want. There are no ramifications for what the visitors do—it’s rated TV-MA, after all.

The show follows the story lines of visitors, hosts, and the park’s human employees (including Anthony Hopkins). The employees live at the compound, always on call, ready to re-program hosts, or manage the visitors’ experience if there is an issue.

Binge watch Westworld before Sunday
On the surface, Westworld is fantastic plot-driven television, but beneath it are many layers. It can get pretty cerebral, so watch out. The show explores themes of technology, history, and even consciousness.

Over the course of the first season, the lines between human and nonhuman begin to blur, and the thrilling drama ensues. If you had any question about whether or not this show is being talked about, check out the fan theories below.

Fan theories
The complexity of the plot and the storytelling on Westworld has spawned tons of fan theories about what is really going on. You can read up on some of the most popular ones, now, before the finale airs. Here are two good ones: Time and Vanity Fair.

Not only is Westworld getting rave reviews, but HBO knows it’s good. It’s already plotted out for five seasons. So hop on the train and get watching!

The season one finale is being directed by one of the show’s creators, Jonathan Nolan. It’s going to be 90 minutes long and will air Sunday at 9 p.m. ET and 8 p.m. CT.

Last Chance to Get STARZ for 50% off!
Learn to Escape the Scam Trap