By HelloTDS on September 19, 2016 in Business, Community, Entertainment 2 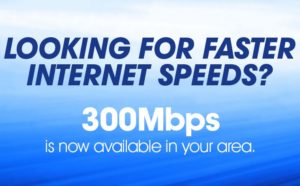 “Now, St. George and Mesquite have 300Mbps! Leaps and bounds above the national average,” said Shane West, vice president of Marketing and Product Development for TDS.

TDS Ultra 300 provides TDS customers up to 300 Mbps download and up to 10 Mbps upload speed.

“Ultra 300 customers can now download up to three times faster than with Ultra 100, our previous highest speed,” said West.  “TDS Ultra 300 is a real timesaver for TDS customers.”

TDS has invested and will continue to invest in our network to provide faster internet speeds to our customers.  “Those improvements have paved the way for upgrades like Ultra 300,” West said.

TDS business customers can expect new internet tiers by the end of this year.

TDS gives big to Holloman’s Big Give
What’s up with my Wi-Fi?