By Missy Kellor on September 15, 2016 in Community, Entertainment 0 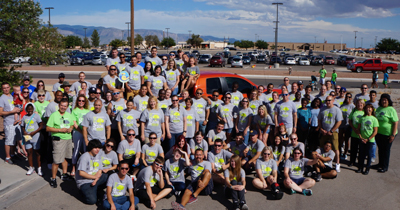 What is one way to make a really big impact on a single community? You help sponsor the ninth annual Big Give competition, just like TDS did. Yes, a competition—but a really unique one. People from Holloman Air Force Base and the surrounding New Mexico communities come together to try and out-volunteer each other.

The mission of Big Give is to change lives. To do that, residents form teams (at least some of the members must be associated with Holloman) and try to do the most impactful, big, volunteer project in the Alamogordo, New Mexico area.

Just how big? Really big. For example, this year participants painted a school, stained playground equipment, made repairs and painted a local shelter, and hosted a food drive.

“We were really happy to be a part of Big Give this year,” says Barbara Mick, manager of Field Cable Marketing for TDS. “As a sponsor we couldn’t have a team, but it’s like we were sponsoring all of the great things people are doing in the community.”

Given the size of the tasks, teams had more than a single day to complete their projects. The event kicked off on July 18 and the 412 participants (on 32 teams) had three weeks to finish.

On August 12, participants and community members gathered for the Big Give After Party to celebrate all of the accomplishments. Each team presented the results of their efforts to a judging panel who handed out 1st, 2nd, and 3rd place prizes, along with two People’s Choice awards.

“As a sponsor, TDS helped make the event happen, from start to finish,” says Barbara. “It was so neat to be able to speak at the After Party about all the projects, hand out awards, and hear all of the applause for the participants.”

“Three weeks of work had a huge impact,” says Barbara. “It’s really not exaggerating to say that these projects are life changing for people who live here.”