It may just look like a shell of a building, but in reality, a warehouse can play a key role in the supply side to any organization, including TDS. A lean, efficient warehouse keeps business running efficiently.

TDS’ Ryan Robles, warehouse technician, has worked in a number of warehouses, but he says the operation in Berthoud, Colorado is a good one.

“This is the best organized warehouse that I have worked in,” said Ryan.  He credits his supervisor, Johnny Olivas, senior warehouse technician, for always coming up with new ideas on how to run the warehouse even more efficiently. 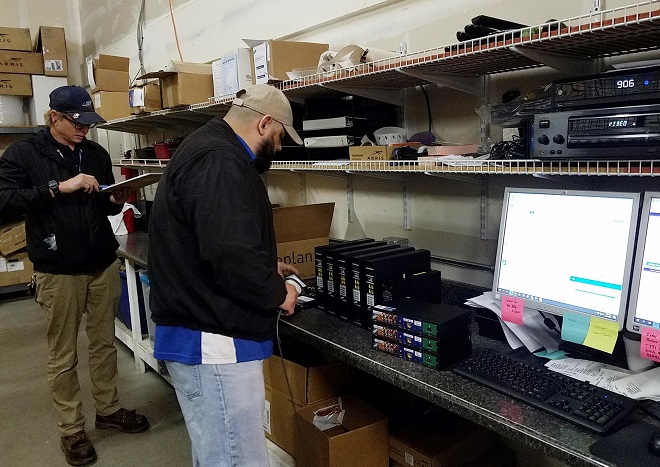 “I like working with Johnny,” he said. “Together, we’re pretty good at keeping up with the inventory.”

Each day, Ryan helps the field service technicians gather their materials so they are ready to serve TDS customers. Working with Johnny, Ryan coordinates inbound and outbound shipments, maintains and tracks inventory, and tests equipment to make sure it is good-working order for TDS customers. In addition, he works with the field service technicians on their equipment needs for the day.

When supplies come into the warehouse, Ryan operates the forklift in the warehouse to load and stack the equipment. He also arranges for the disposal and recycling of the material as needed.

As the FSTs prepare for the day, mornings are always busy for Ryan. “Every day, I need to check out the equipment with the FSTs.  If I’m not helping the technicians, I’m doing other inventory,” Ryan said. “Every day is different. I like the variety.”

Ryan previously worked the front counter in Arvada, but an opening in the warehouse in Berthoud prompted him to seek a move to the warehouse.

“I decided I needed a change of pace,” he said. “I like being on my feet.” He admitted his new position is a “good combination of both paperwork and testing.” He adds that his work day “flies by.”

Ryan was born in Pueblo, Colorado, but now lives in Arvada. He has lived in Colorado his entire life. He’s a big Denver Broncos fan that wished the team won a “little bit more.”

Cheryl McCollum is a blogger for TDS.
View all posts by Cheryl McCollum →
Brenda Cody – TDS Volunteer of the Quarter
FCC approves proposal to change Suicide Hotline to 3-digit code