Drone photography lifts viewers above the trees and the cities to provide a new perspective from the familiar world. 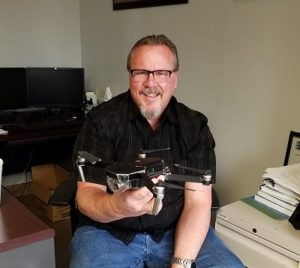 Jim Bambach is a network specialist who works out of the TDS office in Alamogordo, New Mexico. He describes himself as a hobbyist, a techie, a videographer and now a drone photographer.

“Once I got in the air, I saw how different life is above,” said Jim. “It’s a whole different world. There’s lot of beauty in Alamogordo and in the state of New Mexico.”

With his drone, Jim likes to photograph and videotape streams, canyons and waterfalls. His favorite time is the spring when the water really starts to flow and the sounds of the rivers are spectacular.

Jim was born and raised in Chicago. His family moved to Roswell, New Mexico when he was 16. He joined the Air Force and was based at Holloman Air Force base in Alamogordo. He worked as an aircraft mechanic and worked with drones at the White Sands Missile Range near Alamogordo. He worked at Baja Broadband for a little over a year before TDS brought them in 2013.

He loves living in southwest New Mexico and now he’s found a new devotion. For the last eight months, every weekend he’s been busy photographing all the canyons in the area using his drone he calls Roxie. “The technology is phenomenal,” Jim said.  “It’s been real exciting to learn and work with the drones.  It’s been my spark and it’s obvious I’ve found a passion.”

The camera he uses is high definition (4K) and he says the “video quality is quite remarkable.”

With the drone he can photograph deep in the canyons and enjoys exploring the caves in the area mountains. “You’re able to get to places, you would never be able to see.” When he wears his goggles he can watch the scenery right from his camera placed on the drone.

Jim has developed a 4:30 minute video called A Quick Day Around Alamogordo, NM, which starts at sunrise and ends at sunset. The video includes a series of aerial shots from across Alamogordo.

Working with drones
There’s something about plastic blades spinning at high speeds that scream — drones aren’t safe. But for Jim, he finds anyone can teach themselves to fly and maneuver around the mountains and deserts of southwest New Mexico.  “Drones are fairly easy to fly,” he said.

Compared to some states, there are not a lot of restrictions on flying drones in New Mexico at this time. The FAA has banned drone flight above 400 feet within the lateral boundaries of numerous Department of Energy facilities including the Los Alamos National Laboratory, and in restricted air space including Holloman Air Force base.

Jim understands the privacy concerns raised about drones, noting that just because you fly a drone doesn’t mean you’re invading the public’s privacy. “I respect people’s privacy,” he said, adding that he doesn’t follow people unless he gets their permission.

What are Drones?
Drones, also called unmanned aerial vehicles (UAVs), have no human pilot onboard, and instead are either controlled by a person on the ground or autonomously via a computer program. These stealth craft are used for war and military purposes, photographing wildlife, sports, scenery, farm fields, real estate, and for atmospheric research and disaster relief. Drones are becoming the eyes and ears of scientists by surveying the ground for archaeological sites, signs of illegal hunting and crop damage, and even zipping inside hurricanes to study the wild storms. You can even rent a personal drone to soar above the horizon and snap a photo or video.

Drones run as low as $500 and up depending on its use. You can spend several hundred dollars on goggles and accessories.