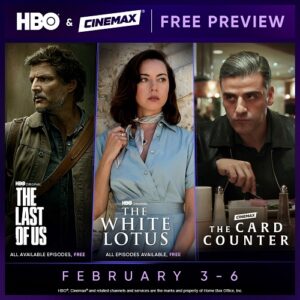 From Friday, Feb. 3 at 6 a.m. through Monday, Feb. 6 at 6 a.m. you can enjoy addictive series, entertaining movies, family favorites, and more on HBO and Cinemax, from TDS.

In addition, customers can catch new seasons of The Last Of Us, Real Time with Bill Maher, and Game Theory with Bomani Jones, all of which debuted this winter.

And on Cinemax, catch The Forever Purge, the latest installation of the horror franchise, as well as Dear Evan Hansen, Halloween Kills, and much more.

After the free preview, call us at 1-855-301-7470 or visit HelloTDS.com to keep all this great programming. Check your channel guide for where you can view HBO and Cinemax.

Here’s a look at some of the new titles this winter:

Black Adam: Dwayne Johnson stars in the first-ever feature film to explore the story of “Black Adam,” whose ancient ways are challenged by modern-day heroes who form the Justice Society.

The Banshees of Inisherin: Two lifelong friends find themselves at an impasse when one abruptly ends their relationships, resulting in major consequences for both of them.

Amsterdam: Set in the 1930s, David O. Russell’s film follows three friends who find themselves in the middle of a shocking secret plot.

The Last of Us: A series based on the critically-acclaimed video game starring Pedro Pascal and Bella Ramsey, “The Last of Us” takes place 20 years after modern civilization has been destroyed.

Real Time with Bill Maher: The comedian/satirist is back for his 21st season talking about the latest hot-button issues.

Cheryl McCollum is a blogger for TDS.
View all posts by Cheryl McCollum →
Don’t answer another online quiz until you read this
The next National Park Service free entrance day is April 22