By Cheryl McCollum on November 11, 2016 in Business, Community, News 0 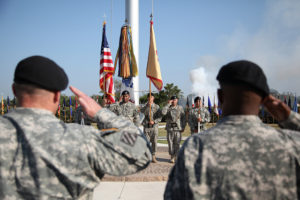 Americans love, respect and honor our troops. Individuals donate more than $2.5 billion annually to the more than 40,000 American charities with military related missions. Others donate their time to help those who sacrifice to keep us safe.

Our veterans and their families deserve to live happy and fulfilling lives.  Unfortunately, veterans suffer from high rates of unemployment, homelessness and suicide.

There are many government funded programs that help veterans and military service members but there is not always enough funding to meet the entire need.  Privately funded assistance is critical to helping America’s bravest citizens.

Before donating, do your homework
Today, the number of veteran charities has grown 41% since 2008.

While many veteran-focused charities are financially responsible, transparent and do amazing work, some are not supporting our troops and their families as effectively. There are charities that struggle with poor efficiency or high operating costs.

Charity Navigator has become the nation’s largest and most-utilized evaluator of charities. It has created a list of about 75 highly-rated charities that are veteran-focused. These organizations provide various services from lifting troops’ morale to financial assistance for food, rent, utilities and medical expenses.

When picking a charity, do your own research.  Call the charity and ask questions such as, How much of the money received by the charity actually goes to supporting the veterans?  How long has the charity been in existence?  How many veterans are supported by the charity?  It could be the charity only helps one veteran at a time but does a great deal for that person. This can be very effective.

For example, Wishes for Warriors asks for frequent flyer miles, land for hunting, hunting tags, vacation rentals, products and hosting fund raising events. Some charities accept raffle prizes for charity auctions or gift cards for the people they are serving. Just make sure your in-kind donation is needed by calling the charity ahead of time.