By Cheryl McCollum on November 11, 2016 in Entertainment, News 0

Friday, Nov. 11
HISTORY Channel: The Warfighters, Marathon Event (series premiere)
Epic first-hand accounts of grit and courage from the veterans who were there. Watch a special marathon of “The Warfighters” on Veterans Day 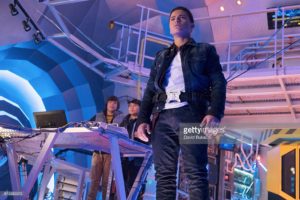 Saturday, Nov. 12
Hallmark:  Every Christmas has a Story: Countdown to Christmas
Animal Planet: Pit Bulls & Parolees: Down, Not Out (8th season premiere)
Animal Planet: Project Grizzly: Into the Wild (series premiere)
Can one man release two grizzlies (Bob and Screech) back into the wild after he’s raised them?

One lucky entry will receive a trip for the winner and seven guests for a special reunion with loved ones. Click here for more information and official contest rules.

Cheryl McCollum is a blogger for TDS.
View all posts by Cheryl McCollum →
Cedar City, Utah converted to all-digital TV service
How You Can Help a Veteran on Veteran’s Day