By HelloTDS on July 1, 2020 in News 0
Military Consumer Month is here! In these unprecedented and challenging times, we’re focusing on consumer issues related to COVID-19. As of June 30, consumers have submitted more than 115,000 reports of fraud related to COVID-19, resulting in reported losses of  more than $74 million. Scammers follow the headlines to take advantage of current events. They’re doing the same now, exploiting people’s concerns about the virus, as well as ripping off those who are affected by the pandemic’s financial implications. 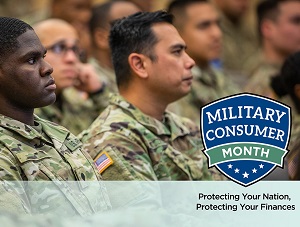 Military and civilian families often face the same consumer issues, but the pandemic underlines some of the challenges unique to military life. Stop movement orders have delayed tens of thousands of permanent change-of-station moves. For so many, that has meant unexpected out-of-pocket costs, maintaining two households, and sometimes less pay. Other factors nudge scammers to target the military. For instance, even if a spouse’s job loss means reduced income, scammers know a servicemember gets a steady paycheck. And for some personnel, the service is their first job, first time away from home, first time making financial decisions.

The Department of Defense’s Military OneSource program reports that several scams target the armed forces. Imposters use official-looking names and logos to pose as legitimate military sites to trick the troops into revealing confidential financial information. Scammers, preying on fears over having a security clearance compromised, pose as debt collectors to pressure servicemembers into paying phony debts. Other scammers offer to monitor the credit of those about to be deployed — but instead, steal the servicemember’s information for identity theft. That last example is notable, because a recent study of reports to the FTC shows that active duty servicemembers are 76% more likely than other adults to report that an identity thief misused an existing account, such as a bank account or credit card.

This month, engage with your military and veteran communities and the FTC. We’ve planned a full month of tips for servicemembers, veterans, and their families about prevalent COVID-19 related scams, as well as resources for navigating the financial challenges of the pandemic. Sign up for email updates, connect with us on Facebook and Twitter, and share our posts, videos, and tips. There, you’ll be able to join one of our social media chats to spread the word.

During July, and all year round, you can help us help the military and veteran communities. Visit MilitaryConsumer.gov to learn more.

View all posts by HelloTDS →
TDS continues to give back in the face of the pandemic
Reports of undeliverables from online sales higher in April, May