Truth or Consequences (T or C), New Mexico isn’t named after a philosophical idea or something of the sorts – it’s named after a radio game show. 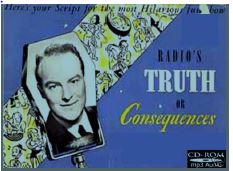 In 1949, to celebrate the 10-year anniversary of the show, host Ralph Edwards set out to find a city willing to change its name to that of his show, “Truth or Consequences” and in return would record the anniversary show there each year. It turned out that multiple cities were interested, so the name change became a competition. The winner?  Hot Springs, New Mexico.

The name change passed on March 31, 1950 and Edwards hosted his anniversary show on April 1 in the newly renamed city of Truth or Consequences. I know what you’re thinking, but it wasn’t an April Fool’s Day joke. The anniversary quickly became known as Fiesta and is still celebrated every first weekend of May.

Fiesta features a parade, live music, vendors, dancing and more each year. Many of the events are hosted in Ralph Edwards Park.

The city was originally named Hot Springs for its abundance of natural hot mineral water spas. In the early 1900s, the region was recognized as a health center, attracting visitors everywhere to take a bath in the therapeutic waters. Many sought out the “21 day soak” to treat “anything that ails you.” Today, dozens of institutions still offer the relaxing baths for spa treatments.

Now, visitors of the city can explore Geronimo Springs Museum to learn about the city’s rich history – including artifacts found in the area, fossils, Native American pottery, and a room dedicated to Ralph Edwards and the city’s name change.

Terry Mahnke, consumer specialist – cable, explains how you can leave town and be in the great outdoors in a matter of no time. “We can get in a full day’s adventure within an hour of leaving home,” he said. 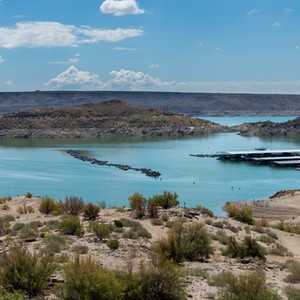 The Rio Grande winds its way through the city, with numerous hiking trails and parks surrounding it. Healing Water Trail begins downtown, its path indicated by markers in the sidewalks. It makes its way out into nature and Veterans Memorial Park.

Tour Spaceport America, 20 miles southeast from downtown T or C, a site for launching spacecraft specifically for users outside of airport or federal infrastructure trying to make space travel accessible and commonplace. Visitors can learn about both the vertical and horizontal launch sites and even experience the G-shock simulator.

Truth or Consequences is a charming community with natural beauty and mineral hot springs as well as cutting-edge innovation from its nearby spaceport.

If you’re looking for a cooler body of water, head to nearby Elephant Butte. The name refers to the shape of a volcanic outcropping that sits in New Mexico’s largest lake. The Elephant Butte Reservoir was created in 1915 when the Rio Grande was dammed to generate power. The lake is also part of the largest state park in New Mexico.