Known as Olympic City USA, Colorado Springs, Colorado, is nestled at the base of Pikes Peak and is home to some of the world’s greatest athletes. With the Olympic & Paralympic training center and the high-altitude Rocky Mountain setting, Colorado Springs is the go-to destination for athletes looking to challenge themselves. And for fans, the new interactive museum and surprise encounters with athletes fuel Olympic excitement. As excitement in the Tokyo games rises, TDS associates from the nearby Woodland Park and Fort Carson offices are sharing their encounters with Olympic athletes. 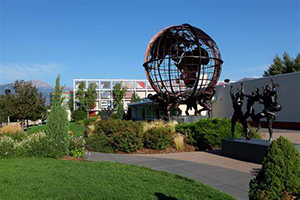 Built in 1978, the Colorado Springs Olympic & Paralympic Training Center is one of only three in the country. Like the other two in Chula Vista, California, and Lake Placid, New York, it is designed to keep athletes focused and healthy as they train for the next Olympic & Paralympic Games. The facility provides dining, housing, training arenas, and other recreational services for more than 500 athletes and coaches at a time.

The training center is designed much like a college campus with a cluster of buildings and sports venues, each serving a different purpose for athletes. Covering 35 acres, the campus features two large sports centers, two swimming pools, a theater, a sauna, and a dining hall where more than 300,000 meals are served each year. There are 242 dorm rooms for the athletes and coaches living on campus.

More than 140,000 people visit the training center each year for its guided tours, which are sometimes led by the athletes themselves.

Mikel, system technician at the Woodland Park office, toured the training center. “It was neat how they walk you through all the different training buildings, like gymnastics and archery. Plus, the pool was really cool! My favorite part was sitting in a bobsled like the pros do.”

Unfortunately, COVID-19 has suspended all tours. For now, check out this video from NBC’s TODAY show. Get a look at the facility’s coolest features, including an anti-gravity treadmill and a chamber in which the temperature, humidity, and altitude can be adjusted to fit the athlete’s training needs.

Museum
Recently named by USA Today as the nation’s Best New Attraction of 2020, the U.S. Olympic & Paralympic Museum is a must-see spot in downtown Colorado Springs. With spectacular architecture, famous artifacts, athlete meet-and-greets, and immersive technology, guests of all ages will enjoy this attraction. Take a look at this article highlighting 13 of the museum’s best features.

Encounters with Olympians
Despite Colorado Springs being the largest city by area in Colorado and having a population of almost half a million people, Olympic athletes are easy to spot, especially in the outdoors.

“I see Olympians when they’re running on some of the local trails,” said Troy, broadband technician at the Fort Carson office. Many athletes use Colorado Springs’ trails for training. One of the most popular, the Manitou Incline, gains 2,000 vertical feet in less than one mile. It takes hikers 45 minutes to two hours to complete, but certain Olympic athletes have run it in less than 20 minutes.

Whether you’re biking, hiking, or running in Colorado Springs, perhaps it’s best to not compare yourself to others.

“I’m in pretty good shape and can do a lot, but it’s not uncommon for me to be passed by phenomenal athletes,” said Joshua, network specialist at the Woodland Park office. “The atmosphere is really motivating.”

Living in Colorado Springs, Joshua and his family have had several run-ins with Olympians. “My sister met Dartanyon Crockett, two-time Paralympic bronze medalist in judo, and my dad drove Bradie Tennell, figure skater whose team took bronze in 2018, to training in his Uber.”

In college, Joshua worked for a local newspaper. After striking up a conversation with Ellen Kercher, a weightlifting national champion training for the 2016 Olympics, he photographed her for a feature in the newspaper.

“I got to go to the Olympic training center where she and her teammates practiced,” he said. “They told me they train three to five hours a day and that the Olympics is always on their minds. From the weight they were throwing around, it showed!”

Michael, broadband technician at the Fort Carson office, once found himself in a bar drinking beer with Russian wrestlers. “You never know who you may be sitting next to,” he said.

Have you visited Olympic City USA or met any athletes? Share your story!