Described by many as an oasis, the town of Alpine, Texas sits in a valley below the Davis Mountains. It’s characterized by its lovely weather and friendly locals. What began as a campsite for cattlemen and railroad workers is now a bustling community with charm and natural beauty all around. 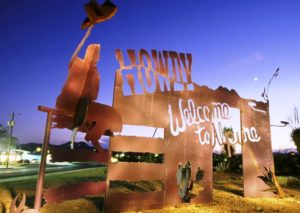 The land that is now Alpine was formally a campsite for cattlemen in the early 1880s. Before long, railroad workers and their families began to inhibit the area as well, and the plot of land became known as Osborne. The best of this land belonged to two brothers, Daniel and Thomas Murphy. When they sold the land to the railroad, the land’s name was changed to Murphyville and was registered as a town.

Murphyville wasn’t around for long, as the town’s residents successfully petitioned to change its name to Alpine in 1888. The town was tiny and remained so until 1917 when Alpine Summer Normal College (now Sul Ross State University) opened, bringing with it paved roads, water, sewage, electricity, and most importantly an influx of people.

Alpine continued to grow with the founding of Texas’ first national park, Big Bend National Park. Although known for extreme temperature (grueling heat by day and bone-chilling cold by night), Big Bend is home to beautiful sights and hundreds of species of plants and animals. The park itself is about the size of Rhode Island, claims 107 miles of the Rio Grande River as its southern border, and encloses the Chisos Mountains.  Alpine is 80 miles north of the western entrance of Big Bend National Park.

Modern day Alpine is a tight-knit community with lots of hometown pride. As a nod to its heritage, the town loves all things cowboy. Ranching fuels the economy and residents regularly celebrate their western roots with cowboy oral-tradition poetry gatherings, western art shows, and of course, an end-of-summer rodeo. Even its Pecos League baseball team is named The Alpine Cowboys.

Sul Ross State University has also brought the town numerous traditions, such as hiking Hancock Hill and signing a notebook at “The Desk,” an actual school desk that three students hauled up the hill that remains there today. It also conducts the Theatre of Big Bend, an outdoor theater program that features actors on horseback.

The city of Alpine boasts safety and a strong economy. This town is filled with character and happy people—even driving the beautiful countryside is considered a treat, not a chore!

Alpine is a TDS cable community and has 15 employees there.

2 Responses to They love all things cowboy in Alpine, Texas