Before the sun rose; a record number of participants came out in force to honor not only the Bataan soldiers, but all soldiers.

TDS sponsored a team of marchers for this year’s Bataan Memorial Death march at White Sands Missile Range, located north of the TDS cable market community of Alamogordo, New Mexico. The march was held March 25, 2018, where 8,300 people registered for the event, about 1,100 more than in 2017.

Participants choose between the Honorary March of 14.2 miles, or the Marathon Route of 26.2 miles.

It was Lynette’s first march and she traveled more than 500 miles from her home in Salome, Arizona to Whites Sands.

Lynette met Lupe and Barb during the early days of the Baja acquisition when she realized they had something in common – a love of running. “For the past few years, Lupe and Barb have encouraged me to participate in the March of the Bataan,” Lynette said. “This is the year I said, ‘I would do it.’” 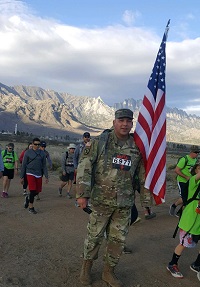 The Bataan Memorial Death March is a challenging march through the high desert terrain of the White Sands Missile Range. During the memorial race, the route is full of soldiers marching and running on sandy and dusty trails and paved roads in the heat. The march is conducted in honor of the heroic service members who defended the Philippine Islands during World War II, sacrificing their freedom, health, and, in many cases, their very lives. The event is held in New Mexico because many of the soldiers defending Bataan were from that state.

Lynette decided to participate in the event because she believes the stories of WWII need to be “kept alive.” In addition, she has a desire to educate future generations about what was sacrificed for the citizens of the United States.

“My father was a WWII veteran and he instilled me with the love that I have for our country and a deep appreciation of battles we fought and the individuals that died for our freedom,” she said. “Reflecting on the suffering and pain these POWs endured gives me strength and courage.  I am looking forward to the 14.2 mile challenge. This event will be very special to me.”

Barbara is marking her fifth year of participating in the march. “This is such an inspiring event. I have great respect for our military heroes that have made great sacrifices for our country.”

Barbara finds the stories of why people march very inspiring and humbling. “You can’t help but think about the people who had to endure this horrific event,” she said. “You think about what they had to go through while you are marching.”

For four years, Lupe has marched in the event. She marches for Antonio Jose Barela, who was in the Bataan March and survived. “I dedicate it to him,” she said, adding that Barela was from New Mexico.

Every year, Lupe said, she looks forward to the march. “I love doing this event. It’s very patriotic. The flags are flying,’” said Lupe. “Spring is also a beautiful time in the desert. The poppies are in bloom and it’s very colorful and green.” 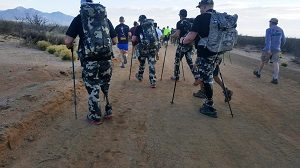 The march starts at 7 a.m. and the last runner generally comes in around 10 p.m. There are several categories at the march, including Military Team or Military Individual or Civilian Team or Civilian Individual. There’s also a light or heavy division where in the heavy division participants are required to carry an additional 35 pounds in their backpack. Many of them carry food in an attempt to understand the stress of what soldiers endured in 1942 during the 65-mile forced trek. At the end of the race, the food is then donated to local hunger-relief partners.

Lynette works out of the Quartzsite, Arizona office and Barbara and Lupe work out of the Alamogordo, New Mexico office.

For those interested in seeing what the day is like, Lupe suggested watching a video of the Bataan Memorial Death March on You Tube.

A brief history of The Bataan Death March

The Bataan Death March was a 1942 World War II march, in which 70,000-plus civilians and Filipino and American prisoners of war were cruelly forced to walk at the hands of their Japanese captors through Philippines jungle with little food or water. Some captives were executed; others died from disease and illness — either during the march or while kept as prisoners afterward.

About 1,800 of those forced to walk were New Mexicans who served with the 200th Coastal Artillery and 515th Coast Artillery at Bataan. They were members of the New Mexico National Guard.

The ordeal lasted five days for some and up to 12 days for others.

Those that did survive the march were taken to confinement camps. Here they were beaten malnourished and riddled with disease, two-thirds of the POWs died from the horrendous conditions. It wasn’t until 1945 that these prisoners of war would see freedom. Many died within their first year of arriving home.